[The following address was given by Rev. Warren Gardner on April 23, 2016 at the Lawrenceville Planned Parenthood Pro-life Rally in Lawrenceville, Georgia. Of the 75 people in attendance, approximately 15 were abortion workers as shown in the images below.]

“I am delighted to be here today to speak on behalf of the “unwanted unborn”. The atrocious murder of the unborn will not end merely because we are here today.  Change will not take place unless God enables us to persuade our neighbors that this practice of abortion is evil. As a Christian and a minister of the Gospel, there are three messages from God that I would like to deliver to you.

The first message from God is from Psalm 125:3: “For the scepter of wickedness shall not rest on the land allotted to the righteous, lest the righteous reach out their hands to iniquity.”

“It is considered as a reason of this promise — that if the trouble should continue over-long, the righteous themselves would be in temptation to put forth their hands to iniquity, to join with wicked people in their wicked practices– to say as they say and do as they do,” said Matthew Henry. Do we not now see people professing to be godly involved in an abortion?

Friends, I suggest that there are two applications of God’s promise:

The first application, wicked rulers are not given to a righteous people to cause them to do wickedly.  We have in the present state of affairs a government that promotes sexual immorality and the slaughter of innocent unborn children. Is this not because we have not been what we should be as God’s people?  Too often we have remained silent as long as we are NOT the victims.  I repeat: God does not give wicked rulers to a righteous people. With the wicked rulers we have, surely there is sin in our midst!

However, there is a “second application” which is a reason for hope.  If we as God’s people repent of our sins and live to honor Him, God has promised that we will not continue to have wicked rulers.  Relief will come, wicked government will end– IF we seek the Lord’s help to call our nation to repentance.  May God replace our judges who promote wickedness with those who “reward good” and “punish evil!”

The worship of the pagan deity, Molech, involved the sacrifice of infants and small children apparently to seek prosperity from this deity.  It is similar to the excuse of “inconvenience” often given for abortion — that the mother will have to forfeit her dreams of a BMW or a college education and a good life.  Not much is known of this pagan religion but it is feasible that the priestly ruling  class of the community promoted this practice to limit the number of mouths that their community’s crop would need to feed.

Such seems to be the concern of our national leaders who have expressed concerns about overpopulation– even as they invite millions from other countries to our labor force to replace the over 57 million (January, 2015 statistic: 57,762,169) unborn citizens who were slaughtered by abortion.  What is being overlooked in God’s message is two-fold: 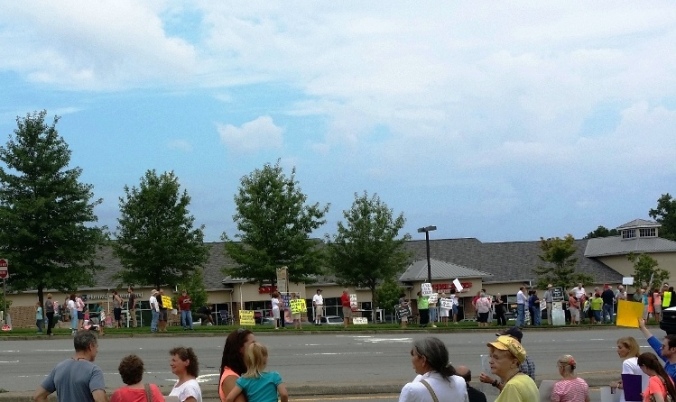 The claim that abortion is legal is a “farce”.  The message I bear from God addresses the nation that refuses to punish this evil. What does God say?  “4 And if the people of the land should in any way hide their eyes from the man, when he gives some of his descendants to Molech, and they do not kill him, 5 then I will set My face against that man and against his family; and I will cut him off from his people, and all who prostitute themselves with him to commit harlotry with Molech.”  (Lev. 20:4,5)

Reformation Presbyterian Church elder holding a sign in the midst of the abortion workers.

In the ancient culture, the man had control over the life and death decisions of his family.  Today our wicked judges give the woman the sole discretion over the life of her unborn child. [The argument is that it is not a child until it is born, but we see the “hypocrisy” of the courts.  The mother can kill her unborn child because the court has defined it is not a child— until born.  But if a drunken driver or a criminal destroys the life of the “blob of tissue” [as they call it] in a woman’s womb, he is tried for manslaughter or murder.  God declares that He will cut off the man and his family for this wickedness.  God promises that He will Himself punish— “all that go a whoring after [Molech].”  It was for this cause that God ordered the destruction of every man, woman and child who were inhabitants of Canaan.  Too often the mother who orders the execution of her child is declared a “victim”—she will answer to God.  The doctors who sell their services for the assassination of the unborn will answer to God. The judges and people who promote and refuse to put an end to this practice will also answer to God.

This brings me to my third and final message from God, a prayer He teaches a murderer in Psalm 51:9, 10 “Hide your face from my sins, and blot out all my iniquities. 10 Create in me a clean heart, O God, and renew a steadfast spirit within me.”

This was the prayer of King David when he had committed adultery with another man’s wife— and she was “pregnant”.  Instead of murdering his baby to cover up their sin, David ordered the assassination of the woman’s godly husband.  It is time for us (like David) to pray for God’s forgiveness on our land for the ways we as a people have allowed this atrocity to go unchecked.  It is time for mothers and fathers and grandparents who have consented and paid the assassin of these unborn children to cry out to God for forgiveness.  It

is time for the judges who have authorized these murders and the doctors who have executed the unjust sentence of death upon these innocent children to beg God for forgiveness.

Who knows what judgment has already been brought on the guilty for their part in this wickedness.  Many women know years of anguish for their crime against their child and God.  How many fathers and grandparents are suffering anguish for an aborted child that they never knew?  I wonder how many medical professionals who assisted in the murder of the unborn suffer “nightmares” as they see before their mind’s eyes the tiny feet and hands and body parts and look on the faces of the tiny human beings whom they have tortured to death.

Friends, there is only one way that God will forgive such a cruel and hideous crime, by our asking forgiveness through the shed blood of Jesus Christ who gave Himself as a ransom for sinners. Sinners such as King David– and such as you, and me.  Will you not pray that God will grant you and our nation grace to plead for His forgiveness through Jesus Christ?  Let us pray for the end of this crime in our land!

Friends, there is only one way that God will forgive such a cruel and hideous crime, by our asking forgiveness through the shed blood of Jesus Christ who gave Himself as a ransom for sinners. Sinners such as King David– and such as you, and me.

Pray God to remove leaders who promote this wickedness and to grant us replacements who love life.  When the claim is that the mother’s life is in danger, pray that an attempt to save both lives will be made.  Ask that He would make our tongues persuasive instruments in His hand to turn the hearts of the people of our nation to defend innocent life!